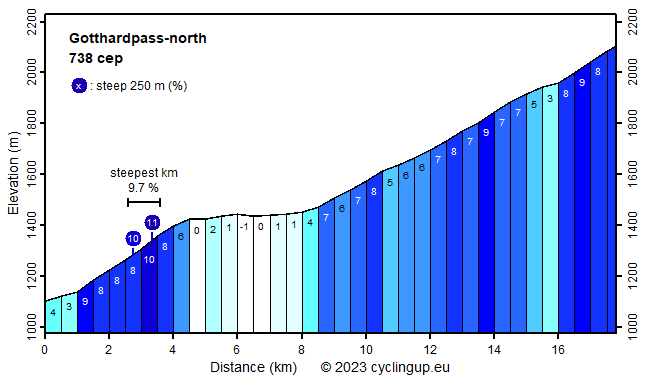 The climb to the Gotthard Pass from the north starts in Göschenen. After a one kilometer long, easy approach (3-4%) the route turns sharply to the right onto the main road. Over the next three kilometers the ride continues through a steep valley, which toward the end even becomes a gorge, the so-called Schöllenen. This was for a long time an insurmountable obstacle for the construction of a continuous road across the Gotthard, until in 1198 the Teufelsbrücke (Devil's Bridge) was completed. There is a lot of traffic in the Schöllenen (and there is a railway). Fortunately, one may leave the road after the fourth hairpin bend (which turns left) and continue on a cycle path that is mostly well separated from the road. This path is often utterly steep, though never over a long distance. Here lies the steepest kilometer of the entire trip (9.7%). After the Schöllenen, the road runs almost horizontal for about four kilometers. In this section you cycle through Andermatt, where the road to the Oberalppass branches off to the left. After Andermatt, the ride continues to Hospental, where the slope becomes considerable again. More than nine kilometers remain to the pass, which, however, are nowhere steeper than 9%. The mountains on either side of the road are made up of a mosaic of gray gneiss and grass. Trees and steep rock faces are missing, so the landscape is pretty colorless. First one cycles on the wide, well-paved main road but for the last three kilometers I chose the "old road". It turned out that the longest part of it is covered by cobblestones. That's probably authentic but doesn't exactly make cycling pleasant. The pass lies about half a kilometer before the clearly visible Ospizio.

The ascent suggested here can be extended by beginning in Amsteg, from Göschenen further down in the Reussdal. This would increase the distance by 16.2 kilometers, the number of meters in altitude with 623 and the climbing effort by 357 climb effort points.