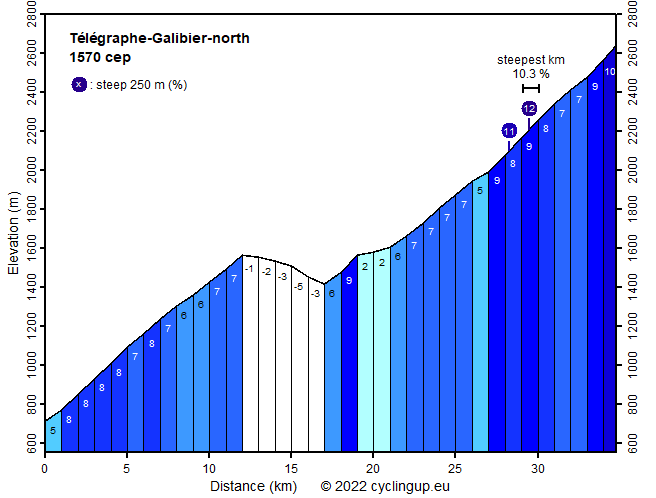 The Col du Galibier is one of the most famous passes in the French Alps. Due to its strategic position it was, until 2019, taken up 58 times in the route of the Tour de France. This makes this pass the clear leader in the Alps. Another reason for the fame of the Galibier is its elevation. With 2642 meters it ranks as the number six of the passes in the Alps. The ascent from the north, from Valloire, is preceded by the ascent of the Télégraphe towards Valloire. This in itself requires quite a lot of hard work (851 elevation meters), which unfortunately does not take place under the greatest enjoyment of nature because the road is quite busy and wide, and runs almost continuously through the forest so one hardly sees the surrounding mountains. Between kilometer 1 and 4.5 the road is somewhat steeper (about 8%). Further on and up to the pass, the slope varies around 7%. The climb misses a passage for recovery but such a passage is then provided by the five kilometer descend, which separates the Col du Télégraphe from Valloire. In this descent 165 elevation meters are lost. Then, in Valloire the Galibier itself begins. On the first ten kilometers from Valloire to Plan Lachat the road heads fairly straight southward through a valley. The gradient fluctuates strongly but barely exceeds 8%. The last eight kilometers are harder, mostly 8-9%, without opportunity to recover on an easier section. Here the road runs through a fantastic background of high, rugged mountain faces. One kilometer before coming to the pass, one turns left before the tunnel. This is followed by the steep final part (10-11%). From the pass there is a breathtaking view to the south on the summits of the Écrins massif, which is covered with snow and ice. Currently (2019) the combination Télégraphe-Galibier ranks as the number three from all over Europe and as the number one in the French Alps on this website, in terms of climbing effort. This is mainly due to the large number of elevation meters (2089) and less to the slope, which is, with a steepest kilometer of 10.3%, not extreme.