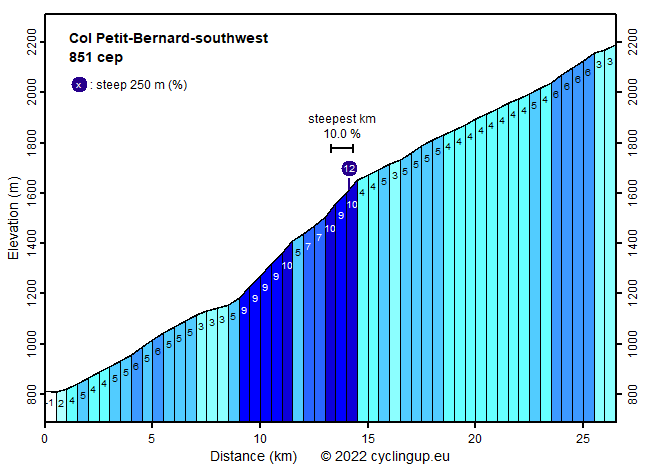 This climb to the Col du Petit-Saint-Bernard is varied. The start takes place at the roundabout a bit north from the train station of Bourg-St Maurice. In the beginning the ride is on busy streets, first to Séez, where you keep left and follow the road signs Petit-Saint-Bernard. Gain of altitude occurs relatively slowly (by up to a maximum of 6%) and after six and a half kilometers the route turns off into a side street to Montvalezan. This offers an alternative to the wide and boring D1090. This alternative was also chosen for the stage to La Rosière during the Tour de France 2018. Up to Montvalezan, which is reached after another two and a half kilometers, the slope remains small (3-5%), but then the road gets steeper. The next two and a half kilometers until the second junction towards La Rosière (do not take the first one) mostly have a slope of 9%. The last kilometer before the main road (D1090) is reached again is the steepest of the entire climb (10.0%). Back on the main road, cycling becomes much easier again. Up to the pass (another 12 kilometers) the road slopes 3-6%, passing, among other things, through the winter sports resort of La Rosière. I found the last section before the pass impressive. First there is the enormous statue of the monk Bernhard of Menthon, who gave his name to the pass and the St. Bernard dogs. A little further the Mont Blanc pops up on the left side of the street, provided visibility is good.