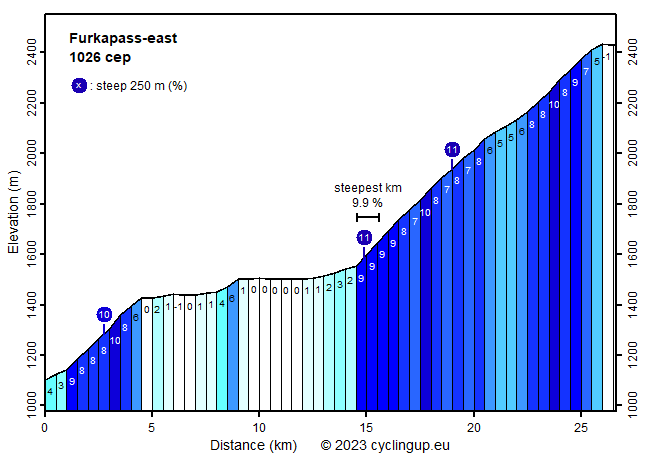 The climb to the Furkapass from the Reussdal has a weakness and a strength. The weakness is the heavy traffic. The strength is the large number of views of impressive mountains. The absolutely best views are obtained on the pass itself, or even better a few hundred meters further, thanks to the view of the snow and ice crowned giants of the Bernese Oberland. The ride begins in Göschenen. After a one kilometer long, easy approach (3-4%) the route turns sharply to the right onto the main road. Over the next three kilometers the ride continues through a steep valley, which toward the end even becomes a gorge, the so-called Schöllenen. This was for a long time an insurmountable obstacle for the construction of a continuous road across the Gotthard, until in 1198 the Teufelsbrücke (Devil's Bridge) was completed. There is a lot of traffic in the Schöllenen (and there is a railway). Fortunately, one may leave the road after the fourth hairpin bend (which turns left) and continue on a cycle path that is mostly well separated from the road. This path is often utterly steep, though never over a long distance. After the Schöllenen follows a very easy section of 10 kilometers through the Urserental to Rehalp (average 1.3%). The remaining 13 kilometers are hard. A little more than 900 meters in altitude still have to be overcome on a road with a gradient varying between 5 and 10%. The steepest kilometer, just after Rehalp, has a slope of 9.9%. But this effort is worth it if there are no clouds hiding the peaks of the Bernese Oberland.

The ascent suggested here can be extended by beginning in Amsteg, from Göschenen further down in the Reussdal. This would increase the distance by 16.2 kilometers, the number of meters in altitude with 623 and the climbing effort by 357 climb effort points.