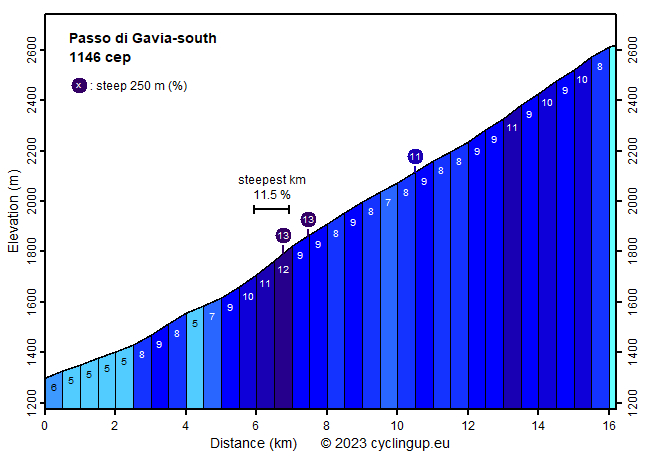 The southern ascent to the Gavia is one of the most beautiful climbs in the Alps due to the magnificent surroundings of mountains and forest but certainly also due to the road, which is, in the last ten kilometers, so narrow that oncoming cars cannot pass each other in many places. Moreover, the Passo di Gavia is after Passo dello Stelvio the highest pass in Italy (2618 meters). Legendary is the ride over the Gavia during the Giro d'Italia of 1988 when cyclists traversed the pass in snowfall conditions. The trip begins where the road to the Gavia crosses the Torrente Frigidolfo, just north of Ponte di Legno. In the first five kilometers there is a fairly steep section (9%), but this is still compensated for by easier parts (often 5-6%). Just past the last buildings in Pietra Rossa the real climbing begins. From here to the pass, the road is steep with an average slope of 8.9%. The first two kilometers are the hardest (including the steepest kilometer of the entire route with a gradient of 11.5%). The narrow road winds itself up with a dozen hairpin bends through the forest. Where the forest is thinning, it is wonderful due to the views and the flowers while the road gets a bit less steep. After the turns, a four-kilometer long traverse follows. At the end of the traverse the road runs through an unpleasant, unlit tunnel, in which the road gardually becomes steeper. After leaving the tunnel you can see the last two kilometers (8-10%), in which the road reaches the pass with a few hairpin bends, ahead. The road surface is miserable here but the mountain world is splendid, partly due to the view of the Adamello (3539 m), lying south of Ponte di Legno. From the pass you should be able to see in northern direction the Ortlergruppe (3905 m) although I am not sure since this view was hidden to me by clouds.