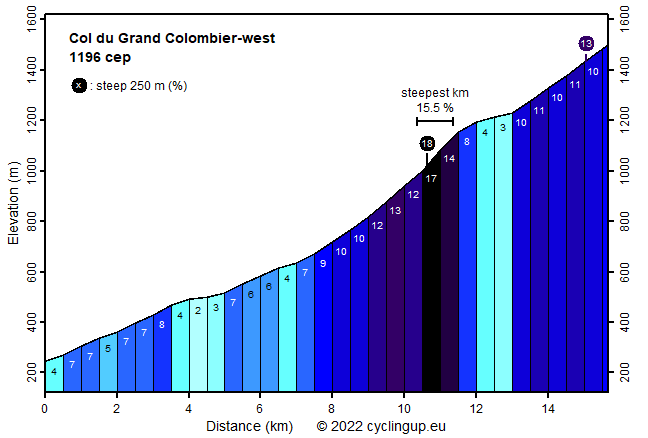 On this website the Col du Grand Colombier seems to be situated in the French Alps, but that's actually not true. The Grand Colombier is located in the Jura, though it should be mentioned that the border to the Alps is not further than 10 kilometers away. In terms of hardness, the climbs to the Col du Grand Colombier and to the Col de la Biche, which is also located on the Grand Colombier, compete excellently with many challenging climbs, which are actually situated in the Alps. Among all the climbs on the Grand Colombier the ascent described here is the most difficult. This is mainly due to the 4.5 kilometers between Virieu-le-Petit and la Sel Fromentel, which, by the way, can be avoided using a less steep alternative. Within these 4.5 kilometers the road winds steeply uphill through the forest, first one and a half kilometers with a gradient of 9-10%, followed by a kilometer and a half sloping 12-13%. Then, just before a sharp left turn all hell breaks loose. The next kilometer tilts 15.5% with a segment of 250 meters of 18%. Here I saw cyclists get off and fall off their bikes. After la Sel Fromentel there is an easy section (3-4%), which however after a kilometer turns into a pretty steep ramp ending at the pass (another 2.5 kilometers sloping 10-11%). Before reaching Virieu-le-Petit, more than 7 kilometers have been cycled since the start in Artemare through a mostly open landscape on a quiet street with a gradient between 2 and 8%.