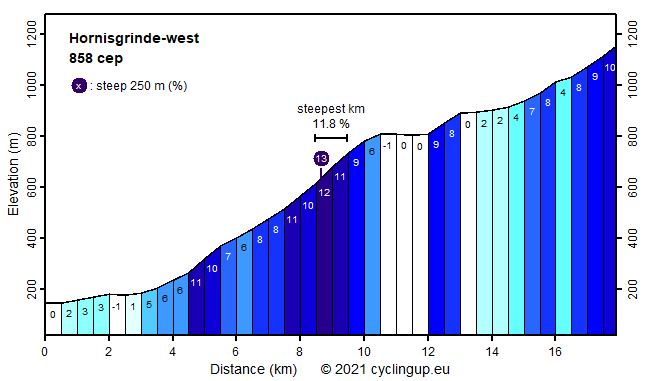 Even though most of the top-10 climbs of the Black Forest are located in the southern part, the ascent to the Hornisgrinde from Achern is the hardest of all. This is partly caused by the number of elevation meters, which just exceed a kilometer (by 31 meters). In the Black Forest only the Belchen-north counts more elevation meters (1114). The ride ends at the Hornisgrindeturm, which is located just over 500 meters from the summit of the Hornisgrinde. The Hornisgrinde is the highest top in the northern Black Forest, at 1163 meters. This climb includes three sections with a slope of 10% or more. The ride begins on the gently rising (0-3%) road from Achern to Saasbachwalden. After a short descent and a little climb (5-6%) the route leads through Saasbachwalden. Then comes the first really steep part (a kilometer of 10 to 11%), ending in a turn to the left at the Straubenhofmühle. In the next one and a half kilometers the road is moderately steep (6-8%) but then, after the last houses, begins the hardest part of the ascent. The next two and a half kilometers have a slope of between 10 and 12%. The end of this passage lies after the village of Brandmatt in a sharp turn to the left. After that turn one can recover in an almost horizontal, two kilometers long section. With a short climb (8-9%) the Schwarzwaldhochstraße is reached, which starts horizontally but gradually becomes steeper (up to 8%). Just before the buildings at the Mummelsee the route turns left onto an asphalt road that is barred for cars, which comes as a relief after the car and motor noise of the Schwarzwaldhochstraße. The ride ends with a pleasant final climb of one and a half kilometers and a gradient between 8 and 10%.