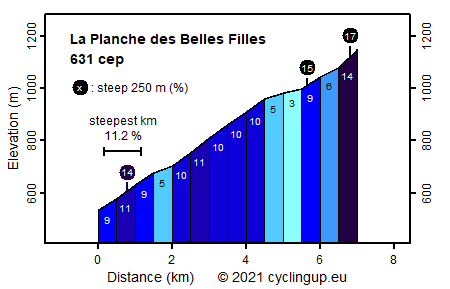 The name La Planche des Belles Filles (The Pretty Girls' Shelf) is based on a folktale. During the Thirty Years War (1618-1648) the girls living near this mountain fled for the Swedish mercenaries, who occupied the region, to the top of the mountain. To prevent abuse by the soldiers, the beautiful young women committed suicide by jumping into the abysses. The Planche des Belles Filles is well known due to the Tour de France. For the first time in 2012 a stage ended here and this was repeated four times over the next eight years. The ascent owes its popularity to its steepness. Over a distance of 7 kilometers, 615 meters of altitude are overcome. This corresponds to an average gradient of 8.8%, which on its own already makes the climb quite hard. However, the torture is considerably enlarged by to the irregularity of the slope. There are some pretty easy sections; twice the road even slopes downhill, which, of course, has to be compensated for elsewhere. Over the first 5.5 kilometers ending at Le Resto de la Planche des Belles Filles, the wide road mostly has a gradient of about 10%. In this part of the climb the steepest section (a 250 meter section of 14%) is found less than a kilometer after the start. If you turn right at Le Resto, another very steep section follows (a 250 meter section of 15%). Shortly after that you leave the asphalt to continue cycling on a largely unpaved road, which leads in a large bend to the destination at the top of the mountain. With this addition (la Super Planche), the route became extended for the first time in the 2019 edition of the Tour. Climbing is aggravated here by loose stones on the road surface, which invite to slip in the bends. The ascent ends with the steepest 250-meter section of the ride (17%).