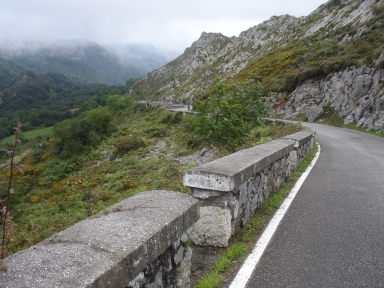 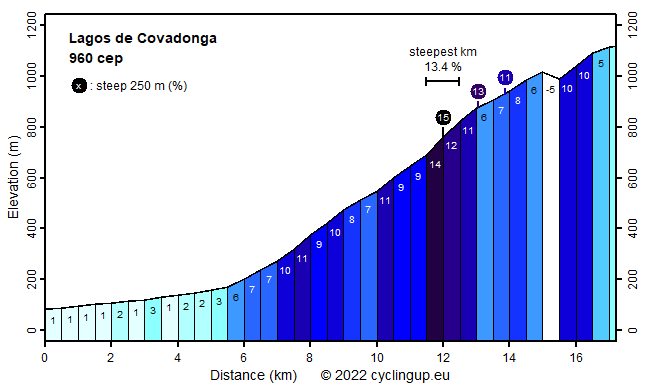 You are cycling a famous climb. You are getting really tired because it is a pretty steep one. And then, what you see ahead is a stretch of road that is even steeper. The end is not immediately visible. This description applies to La Huesera (the boneyard), a stretch of about a kilometer long with a slope of 13.4%. It is part of the Lagos de Covadonga, a classical ascent taken 19 times during the Vueltas of 1983-2014. Yet, there is another important reason why this climb is famous. It passes and got its name from Covadonga, the location where it is said that in the year 722 the Reconquista, the reconquest by the Christians of Spain occupied by the Moors, began. And yes, this victory was due to the cross that the Chistian leader, Don Pelayo, had received from the Virgin Maria. This makes Covadonga a holy place for the Spaniards. The climb ends near two small lakes that attrack hords of tourists, who have to take the bus from Covadonga to reach the lakes. Hence, the road is relatively quiet but alas the many buses are a nuisance since many of their drivers are ruthless and seem to believe the road is theirs. As to the climbing aspects, the pleasure begins really at the round-about near Covadonga where the road is blocked for private cars. The next 5 kilometers are hard with a slope between 7 and 11%. Then comes the already described climax, La Huesara, which ends where the road bends to the right. The final 5 kilometers are variable. There is a descent of 33 meters, there are steep parts (up to 13% for a 250 meter section) and there are easy slopes up. The climb ends at the Colláu Les Valeres (1118 m), about 1 kilometer before the Visitor's Centre. According to the pictures I have seen, the lakes and their surroundings are of great scenic beauty but I cannot confirm this because in the upper part of the tour our view was restricted to the nearest 20 meters or so.

intoAsturias
For tours in the splendid and varied nature of Asturias.